Posted by laurence at 1:29 PM No comments:

https://highlandsministriesonline.org/blogs/highlands-blog/10-parenting-tips-for-raising-real-kids/
Posted by laurence at 6:54 AM No comments:

"So we must believe God's promises at this one moment in which we are.
Consequently, in believing God's promises, we apply them - the present meaning of the work of Christ for the Christian - for and in this one moment - one moment at a time.
If you can only see that, everything changes.
As we believe God for this moment, the Holy Spirit is not quenched.
And through His agency, the risen and glorified Christ, as the Bridegroom of the bride, the vine, brings forth His fruit through us, at this moment.


This…is the only way anybody can live; there is no other way to live but moment by moment."

Posted by laurence at 5:14 AM No comments:

https://www.christianhistoryinstitute.org/blog/post/god-and-man-in-iceland-part-ii/
Posted by laurence at 6:43 AM No comments:

Our Memorial Day Campout was a rousing success mostly because, somehow, everyone involved managed to survive. That is no small matter when you consider the range of ages that were represented. We had some that were just out of diapers and a few about to return to the use of that necessary undergarment. Also, the level of experience in camping among the participants was all over the chart. You could tell this by the way some set up their campsite. It was apparent that, for a few, the only other time they had done anything like this was in their living room at home. You know, bringing blankets from the bedroom and stretching them across the top of the couch to a couple of chairs, all temporarily and precariously anchored by pillows and books. Fortunately, by contrast, others had their tents, cots, and sleeping bags inspection ready; like they had just gotten out of the Marine Corps. Truly, we represented maleness in all forms of readiness and extinction.

Our campsite was a leisurely mile-hike ‘into the wild’ right off the Virginia Creeper Trail which is, for all intents and purposes, a gravel road. Some of our survivalists took advantage of this by actually rolling their gear instead of carrying it in on their back and shoulders. I noticed one large wheelbarrow in camp, a couple of wagons, and one guy even rolled a huge ice chest that entire mile. I kinda thought this was a bit lame until later he offered me a cold and frothy brew from that same ice chest. Mmmm, I thought, and then suggested that perhaps he should equip his rig with larger tires and maybe some bicycle shocks for ‘the next time’. Hey, I’m just looking out for him and any others who might want to bring, and of course share, such beverages.

We all arrived just in time for the rain to start falling and threaten to soak all of our equipment as well as ourselves. I, being the leader/organizer, thought about how ill prepared most campers would probably be so I intentionally did not pack any rain gear so as to ‘suffer with my men’ only to see parkas, rain coats, and slickers surrounding me. So I naturally adjusted my lead-by-example aura by standing around getting soaked and shivering, attempting to now exemplify a Pauline contentment in any and all situations.

Firewood was a rare commodity during our wilderness sojourn; especially dry wood since it had been a rainy season AND it was raining now. So all the young boys were sent on recon to find and secure combustible material to keep us all warm and dry. This resulted in an accumulation of about, but not quite, two handfuls of twigs. Efforts were then bolstered by threat, I mean encouragement, and we ended up with sufficient natural fuel to produce that requisite of all requisites when it comes to a legitimate camping experience—smoke. This is important for reasons that all experienced adventure writers will tell you—smoke not only ‘seasons’ your food but also impairs your vision so as to not be able to see how bad the food looks. Plus, it is an olfactory proof that you have been ‘out there’ and helps to mask that undercurrent of B.O. that, if not subdued by something as strong as campfire smolder, would threaten the possibility of being allowed back into the domicile upon return to civilization.

Mealtime resembled one of those old National Geographic Specials that I used to watch on TV. It is quite the spectacle to observe (mostly) white men attempting to use a camp fire to cook. This is almost as tragic and as dangerous as white men trying to dance. We’re talking primitive. Sure, some brought modern contrivances such as portable grills  but we are still talking about open flames.

One technique applied was to just wrap meat and potatoes in foil and throw it into the bowels of the fire in hope of it eventually turning out like beef burgundy. But, you know, at a certain temperature aluminum does melt. So while some foods were lying somewhere within the bed of coals others hovered above the flames impaled on sharpened sticks wielded by six-to-nine year olds. Actually, these kids did pretty good. I think that at least 18% of the hotdogs presented to the heat actually turned out edible, and at least 3% of those did not end up in slipping off into the dirt, or fire, or eaten by the dog that was staying in our camp. This fact, more than any other, serves to explain why the children’s health was so good upon their return home (knowing what we know about what tube-steaks are made of).

Later that night we retired to our tents to lay upon the large tree roots and sharp rocks that seem to materialize under every campers bedroll despite all efforts to secure that spatial anomaly known as ‘cleared ground’. Sleep is never easy when sliding into a sleeping bag that has been packed away since last year. The smell is akin to an over-used athletic shoe and has the feel of something a bit moldy to the point of feeling like soft fur; damp, soft fur. This is the exact point when married men at camp think of their wives. They think, “You know, my 1/8 share of the bed back home doesn’t seem so bad right now.”

After breakfast the next day one of the men, an actual mountain man, gave us a talk on knives. He managed to turn this into a life-lesson by explaining the usage of the different blades in his possession and what they meant to him.  One had been used to slice through his septic system drain fields to effect repair, another was the one he had used to castrate pigs, the next one he had utilized regularly to clean his finger nails, and so on. You get the picture. There were about 15 knives in all which, after every story associated with each knife, he then passed them out for us to ‘handle’. Talk about your Show & Tell from hell. I was sure glad breakfast had come first.

Another man and his adult son taught the group how to cast a fly rod. The first step in this is to first muster an air of superiority over all other fishermen. After all, fly-fishing is for the elite. But attempts to master the actual technique of fly casting eliminated any smugness that had been accumulated. The only real accomplishment was that some members of our party actually mastered various techniques of tangling their line and even managed to invent a few new ways. No fish were in any danger during this event unless they had somehow climbed a tree directly behind one of the new, would be, anglers.

When we hiked back to camp to pack it all in we knew somehow that none of us would return the same as when we had first started this 24 hour odyssey. We were different, well, at least deprived. We wanted sleep, food, a shower, but most of all, to just brush our teeth. We had endured…enough.

We carried away with us the smell of smoke and ash along with the stigmata of insect bites, poison ivy rash, scratches, burns, bruises, and the occasional imbedded fishhook. These physical evidences are really what camping is all about, for each ‘scar’ tells a story and whether on purpose or by providence we all became living epistles of such titles as:

I Stood Too Near an Eight Year-Old Roasting a Marshmallow
Oh The Places You Will D’oh!
These Leaves Look Safe For Toilet Paper
I’m Ok/You’re Ok: We’re Both Lying
Who Needs a Flashlight?
Pan Hot/Cup Hot Too!
Hey Guys—Watch This!

These and other stories are now part of our collective narrative. When will we write the next chapter? Probably soon. It seems inevitable for, as the patriarch, Job, once wrote, “Man is born to trouble as the sparks fly upward”. That thought obviously struck him while sitting by a fire. Sounds like the guy who suffered the most in this life was a camper too.

https://blogs.thegospelcoalition.org/justintaylor/2016/03/26/15-pieces-of-writing-advice-from-c-s-lewis/
Posted by laurence at 9:42 AM No comments:

The Baptism of Lauren Windham 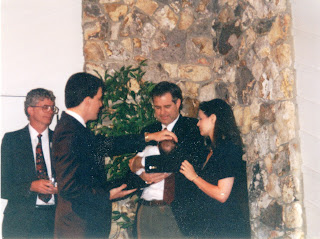 Minister: "Do you speak for your household?"

Minister: "Do you trust in God's covenant promises on her behalf."

Laurence: Yes I do. What other hope have I? I am a total mess. I don't even know how I got this far.

Who is this beautiful woman next to me? Why are all of these people here? Why are they loving and supporting me? Me, of all people?

Minister: "Do you trust in the Lord Jesus Christ for your child's salvation?"

Laurence: Oh God, save my little girl! There is no hope outside of you, Lord. At some point, help her to be aware of your presence and your great salvation.

Minister: "Will you raise this child up in the nurture and admonition of the Lord?"

Laurence: I'll say 'Yes' but I cannot do this. I am a hollow man.
I can teach her to whistle and to laugh. I can show her how to make an omelet and what it takes to be a good friend to others. I can help her to be forgiving and to love poetry. Do these count?
I will pray for her and with her and make sure that she reads the Bible. And everything that we talk about will be within the context that Jesus is our Lord and Savior and the Creator of the world.
And I will pray that she gets a double portion of the grace that brought me to this place in my life today.

Posted by laurence at 5:54 AM No comments: